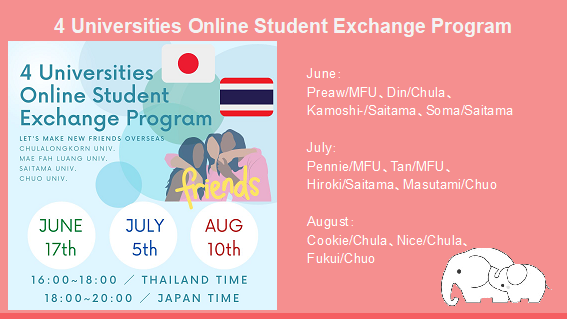 While the end of pandemic could not be seen, more than 185 students applied for participation by calling on each student to have an opportunity to have exchanges between Japan and Thailand.

Haruna Kobayashi and Yuka Shimabayashi, who are the OCA staffs, actively worked on this operation and communicated with the representatives of each university and energetically promoted it.

This program began with the work of having student representatives selected from each university, communicating closely with them, and discussing what the students would like to do with their own hands while creating the program.

In a monthly program where students planed and created their own content, they introduced each other’s countries, discussed themes they were interested in, introduced each other’s campus life, and played games that they created by themselves. We set up a plan for the participants to enjoy, and made new friends online hoping for the day when we could actually meet.

There were 185 students applying for participation. The students who actually participated are as follows.

Eleven Japanese-Thai student representatives, three each from Chula, MFU, and Saitama, and two from Chuo, planned and moderated the contents of the exchange meeting under the guidance of Ms. Kobayashi and Ms. Shimabayashi. The contents of the 3-day program are as follows.

I was able to hold the first online exchange meeting in the Japan-Thailand Student Exchange Program. I was impressed that it was very well done. In particular, the student representatives from Japan and Thailand cooperated in planning and implementing the program. I was impressed with the fact that both Thai and Japanese students who participated were very active in the conversation. Both Japanese and Thai students usually are shy and they don’t want to participate in the conversation, but they were able to have a positive conversation in this program. I think this program was a good opportunity to get to know each other through the conversation. Japanese and Thai students also talked in the breakout rooms. It worked very well. The student representatives from Japan and Thailand, who were in charge of planning and moderating this program, were able to create an atmosphere where they could understand each other and talk freely during several planning meetings. Thank you for your hard work. I believe we have made a very good program.

This four-university online exchange meeting was characterized by the fact that it was a series of three times, without any academic elements, and that the students thought about the plans for each time.

Due to the new coronavirus infection, almost all international exchanges continue to be forced online. Even so, it is wonderful to be able to carry out a new attempt, and I am happy to be able to participate in that attempt.

Even if there were variations in English proficiency, each of the participating students seemed to have enjoyed and gained something in the meeting.

This is largely due to the excellent moderation of Ms. Kobayashi and Ms. Shimabayashi. I just hope that my seminar students learned something about leadership from them.

① Eleven student representatives discussed many times and decided on planning and progress. I think it was a good experience for Japanese and Thai students to hold the event together.

(2) It is relatively easy to gather participants in Thailand, where the internet and SNS are popular. In order to attract active participants to the event, it is better to combine an actual offline project with an online social gathering. Enthusiasm will be different if you can actually meet immediately.

③ There are many Thai students who want to know about Japan, and want to make friends with Japanese students, but I can’t find a way to do it.

I want to enhance the program that many Thai and Japanese students make friends, and enhance the project to gather people at online exchange meetings and visit Japan and Thailand.