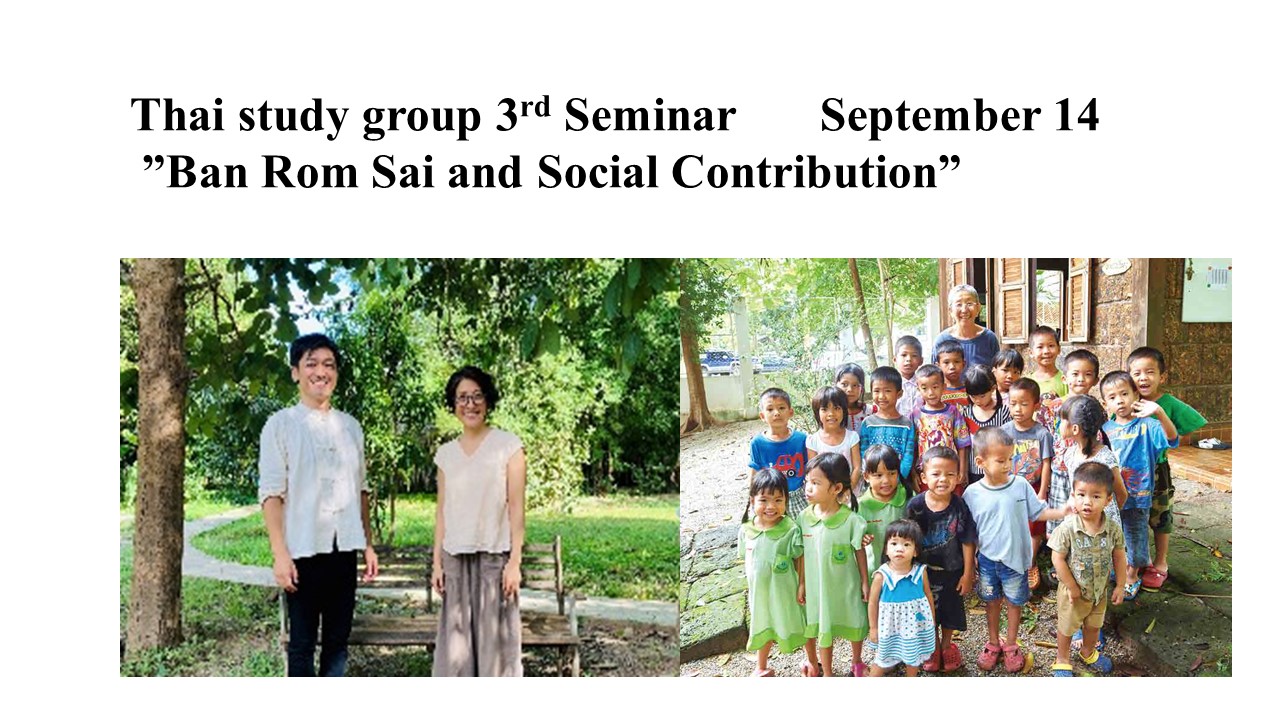 I’m Ryo Higashida, a junior student at Chuo University. We report on a seminar of the 3rd Thailand Study Group held on September 14th. This time, we asked Ms. Miho Natori and Mr. Kentaro Toda to give lectures under the title of “Ban Rom Sai and Social Contribution”. A total of 30 participants from Chuo University, Keio University, and OCA gathered on the day and made it a very interesting seminar.

Ms. Natori introduced us while walking around the orphanage with her camera. A big banyan tree in front of an office, a children’s house, an ICU isolation ward, a library, and an HIV medicine room. The children were not at school, but the atmosphere was quiet and surrounded by green.

Mr. Toda introduced us to Hoshihana, a guest house adjacent to the orphanage. There are 11 guesthouses, a sewing shop, a shop, a dining room, and a large pool. Armani Japan donated the pool in 2003 after learning that the children were not allowed to enter public swimming pools because they had HIV. In 2008, the pool was used as the setting for a movie starring Satomi Kobayashi. We were introduced to the facilities of the guest house “Suica House” built near the pool.

Ms. Natori told us how she started Ban Rom Sai.

“In 1996, I came to Chiang Mai to visit my friends, an old man who worked in a garment factory, and a female doctor. I was captivated by the colorful beauty of Chiang Mai. The female doctor friend of mine was taking care of a terminally ill patient behind the temple. At that time, many people died of AIDS. A hospital with many sick people and a shortage of manpower left an impression on me.

In 1997 my mother visited Chiang Mai. She took care of the terminally ill AIDS patients with her female doctor friend. A girl who was not yet 20 had AIDS said, “I’m dying, but I’m very worried about my child to be left behind.” My mother said, “I have lived freely until now, what can I do for these children?” Around that time, she received an inquiry from Mr. George Armani asking if she had any good ideas for helping with AIDS. She decided that her mother and she would build an orphanage to care for HIV-infected orphans.

Both my mother and I were completely amateurs and knew nothing about the construction and management of an orphanage. We worked hard to raise the HIV-infected orphans we had taken care of by making their own meals. Many volunteers helped us. However, when the orphanage opened, there was no good medicine and 10 children died within 2 years. We got a big shock. People in Thailand believe in the teaching of reincarnation, and they told us, “Even if children die, they will be reborn immediately, and the next time they will be reborn as healthy children.” We feel that these words have helped us. This year marks 23 years since the orphanage opened. Now that good medicine has been developed, not a single child has died since then.”

3．What kind of problems did you have in the management of the orphanage after that?

At the time of its opening, Ban Rom Sai was managed by 100% volunteers and 100% donation. When the orphanage first opened, it attracted a lot of attention as an HIV-infected orphanage, but after that it was no longer talked about. Volunteers also helped out when they could afford it, but the time when they couldn’t afford it soon came, and it became an issue how to separate volunteers and work that pays salaries. Another big issue was how to establish a profitable business in order to stabilize the management of the orphanage.

After the Great East Japan Earthquake in 2011, donations from Japan went to the disaster areas in Tohoku and stopped coming to Ban Rom Sai. Until then, there was a need to change the structure of 70% donations, guest houses, and 30% sales of goods. Focused on product sales, established a brand, and carried out sales activities to sell all over Japan. Decided to advertise Hoshihana as a resort. With the slogan “Aim for 100% Independence,” we aimed to make the children, the orphanage, and themselves independent. As a result of various efforts, we were able to achieve a system of 75% sales and 25% donations before COVID-19.

Then we got Corona pandemic. In March 2020, there were no reservations for Hoshihana, and the only way to sell products was online. In order to protect the orphanage, in June 2020 all businesses were suspended and employees received unemployment insurance. All the Japanese staff returned to Japan, and only the mother remained at the orphanage. Recently, Thai customers have finally started to return to Hoshihana, and online reservations have resumed. I hope that we will return to the active state before Corona from now on.

４．Relations with children in surrounding villages

When Ban Rom Sai opened, the villagers were afraid that an AIDS orphanage had opened, so children did not come near it, and even a postman did not come. This state of affairs lasted for quite some time. We made the library you saw earlier, and made it possible to freely use and read computers, DVDs, and books. Children living in the surrounding villages started using the computer in the library to do their homework, and the number of children coming to the library suddenly increased. It took five to ten years for discrimination to disappear, but now villagers feel safe when their children go to Ban Rom Sai. Also, a soccer team has been formed and the children from the surrounding villages are actively participating in the game. We believe that such activities support the children.

１）What kind of education do children receive?

When the orphanage opened, the children did not even go to school. One day one of the children said, “Mom, I want to go to school.” After consulting with the principal of a nearby school, she began attending school, but after two weeks, the principal told her, “The other children’s parents object their children to being together with you, so please don’t come.” After that, she was educated in the orphanage in the form of home school. After that, a school in the city accepted our children, and recently a nearby school started accepting them.

Children of HIV-infected orphans are characterized by being hysterical, a little slow, and restless. Even if they can’t study, we try to find out what each child is good at and develop that strength.

The children’s drawings are made into postcards or used on the walls of buildings to give children who are good at drawing confidence. There is also a child who came in 7th place in Thailand’s Robo Olympics after being called out from elementary school. We want to develop the individuality of children, not to expect them to be able to study.

２）Is there any support from the Thai government?

There is little subsidy from the Thai government. We have no choice but to go on our own.

３）Why did you start an orphanage in Thailand?

I don’t think I’ll do it from the beginning because it’s a loss if I think about opening an orphanage. I think I ended up falling in love with Chiang Mai. As I think it’s interesting, I work there, it happens to be Thailand, Chiang Mai, HIV, and volunteer. Plunge into what you are interested in, find what you like, and if you find what you like, I think you will be able to do your best even if there are problems.

４）Is there anything you would like to say to the students?

I think Corona pandemic has changed everyone’s way of thinking. In the past, I used to set fixed goals about what I wanted to be and how I wanted to live my life, but now that I think that death comes to everyone and that everyone is equal, so I think the time will come that we enjoy the journey of life without being bound by fixed goals. In Thailand, the idea of “mai pen rai (it’s okay)” is common, and in the midst of the great damage caused by the flood, a father takes his child and went fishing, saying that the flood will bring a lot of fish. I want people to enjoy a leisurely way of life that is hard but fun, that they will work hard together, and that they will enjoy the road that goes back and forth.

1）Thank you very much for your valuable time.

Orphanages and AIDS are fields that we don’t often touch on in our lives, and it was very interesting to hear Ms. Natori’s story about how she became interested in such fields because she seemed to enjoy herself and fell in love with them. I am impressed with the word that “tokimeki (thrill) is important” when trying new things. I would like to refer to it because it is time for me to worry about such things in job hunting. Thank you very much. (Junior)

2） I wasn’t sure what the facility in Ban Rom Sai was like, but through the video movie, I thought it was a very clean and relaxing place. It made me even more excited to actually go there, and I wanted to go see different places and play with the children. In the story, there were episodes where they had a lot of troubles, and I felt how important Ban Rom Sai is and that it will be a necessary facility for children in the future. Hearing that HIV is not widely known and that there is still prejudice, I thought it was important that we should also learn about HIV and teach it to the people around us to spread knowledge about HIV to many people in the future. Thank you very much! (Junior)

３）Ms. Natori said that she felt as if she had fallen in love with Chiang Mai, which left a strong impression on me. Until I heard the story, I was very curious about why the orphanage was suddenly set up in Thailand and how it happened, but I was really lucky to hear the story directly and see the situation there. I heard that it was a meaningful encounter. As she spoke vividly about the charms of Chiang Mai, Thailand, my desire to go to Thailand and meet the children of Ban Rom Sai grew stronger. I won’t be able to go to Thailand this year, but I hope that I will be able to experience Thai culture more deeply before I go to Thailand, so that when I do, I will be able to fully enjoy its charms. Through these online talks, I was able to realize once again that the world is connected beyond national borders by connecting with the world online, and it was a valuable experience. Also, regardless of my seminar activities, I definitely want to stay at Hoshihana Resort! Thank you very much for your time today. (Sophomore)