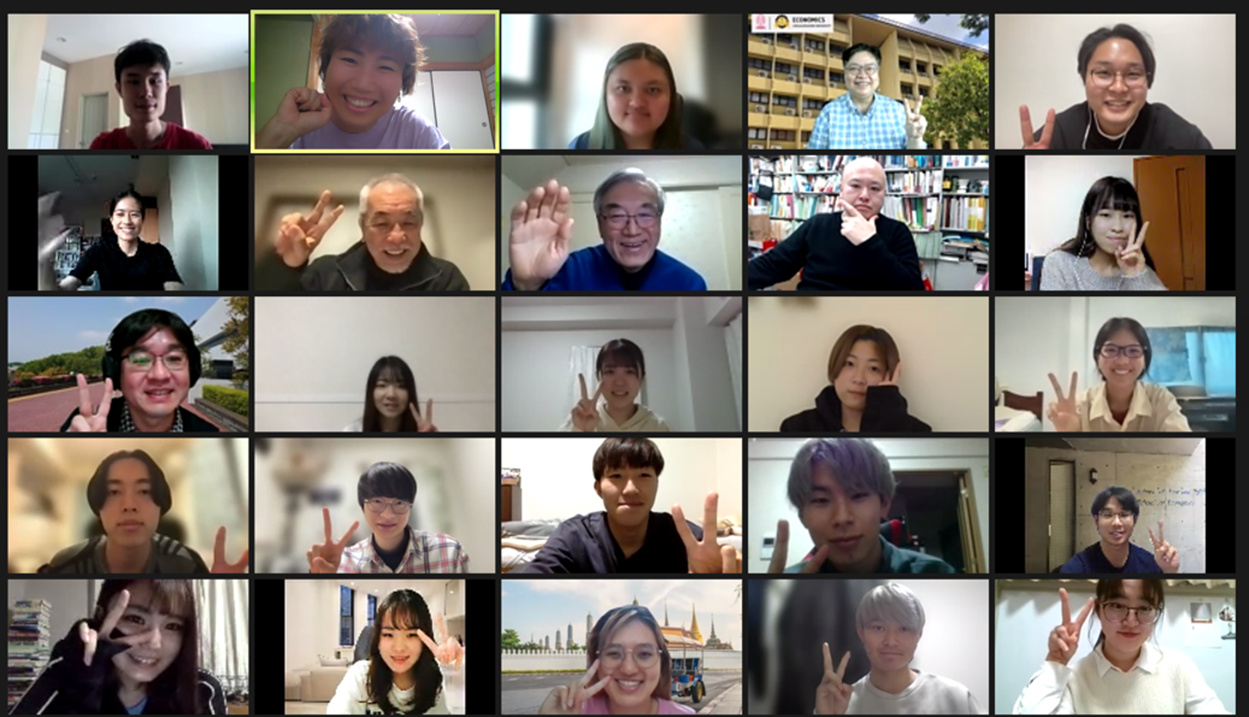 -for Road Projects and Railways- “

Theme: Differences in Traffic Conditions between Thailand and Japan

The content of the lecture was delivered to the participating students in advance at this time as well.

2. Theme of Individual Discussion Given by Professor Goto

Discussions were held from the perspective of economics, such as methods for privatizing road and railway businesses in both countries, measures to eliminate road congestion, and construction of high-speed railways to replace air routes.

Participating students broke up into three breakout rooms for discussion, and Chulalongkorn University Sirima-sensei, Pear-sensei, and Chuo University Komoriya-sensei participated in the discussion.

After graduating from Chulalongkorn University, Dr. Pear (Chadatan Osatis) studied abroad at Saitama University, and graduated from the doctoral course with a seat in Dr. Nagashima’s laboratory.

35 students from each Faculty of Economics from Chulalongkorn University (9 students),

nominated and 28 students gathered at the Zoom meeting on the day.

This time, MFU suddenly started face-to-face lessons from the correspondence with the

Corona pandemic, and the number of participants decreased due to the time of this seminar.

We conducted a questionnaire to the students who participated in the seminar. 5 Thai students and 15 Japanese students answered.

6. Questionnaire Excerpts of opinions and impressions

Q1. Opinions and impressions about “Was the project meaningful while you couldn’t go abroad?”

* It was meaningful that I could communicate with people from other universities.

* It was very refreshing because I don’t usually have an opportunity to interact with Thai people.

* It was very meaningful because I had no other chance to actually hear the story of Thailand or talk with the students of Saitama University.

* It is difficult for me to create opportunities to interact with people from overseas, so I enjoyed participating in such projects.

* We were not so good at English, but we could try to tell our opinions.

Q2. Opinions and impressions about “Was the content of Professor Goto’s lecture interesting?”

* I became a little interested in transportation in other countries.

* I got to know the circumstances of that field which I didn’t know at all.

* It was interesting to know the traffic situation and countermeasures in Japan and other countries where I didn’t pay attention to them at all.

* I had never thought about transportation, but it was a familiar issue that we could easily talk with Thai people.

Q3. Opinions and impressions about “Did you understand Professor Goto’s lecture?”

* I think it is important for the government and companies to separate and develop efficiently.

* Because we received an explanation in advance, we understood the situation smoothly. I felt that it would have been high level without explanation in Japanese.

* It was difficult to hear English sometimes, but I think I could understand most of the content.

* The content of the lecture was a little difficult, but the teacher had introduced it in the video in advance.

Q4. Opinions and impressions about “What were the method and content of discussions divided into each breakout room?”

* I enjoyed the communication very much.

* It was interesting because the opinions of Thai students were very valuable.

* The Thai teacher proceeded with the discussion very smoothly.

* The number of people per group was too large, and it was difficult to talk because I didn’t know who should speak.

* It was very interesting, because it was more like exchanging information about the current situation and life of each, rather than discussing the content of the discussion.

* I could participate it smoothly, because I knew the agenda to be discussed and was able to prepare my thoughts in English in advance.

* I wish I had a little more time in this part.

Q5. Impressions and opinions about regarding “How was the overall time management?”

* It was a very good experience.

* I realized my English proficiency problem.

* I was a little too confused and spent a lot of time, so we should have reduced the number of detours. Also, there were a few places where the teachers were the only ones who got excited, so I wanted them to ask questions that would have made it easier for the students to speak.

* I was able to relax it because of the ice break.

* I wanted a little more time to talk about things other than the content of the study session.

* I could have talked more if it weren’t a little more academic topic. Academic words inevitably hinder communication.

Q6. What did you feel and get from participating in it?

* Actively speaking has a positive effect on creating an atmosphere within the group.

* I learned that I could interact with people from other countries, even though I have poor English proficiency.

* I felt the difference between nations because the degree of transportation network development was different between Thailand and Japan, and the measures were also different. Also, I could know the current situation in Thailand.

* I thought that if I had more English ability, I could have a meaningful discussion. I found it very interesting for many people in different regions to work on one thing.

* I felt the difference in the current situation due to the traffic problems between Japan and Thailand, and I thought that it might be possible to make use of it in each other’s countries.

* This program has given me a very good communication experience for the future.

7. Information on “Japan-Thailand Student Exchange” in 2022

After the seminar, we announced the plan for “Japan-Thailand Student Exchange”.