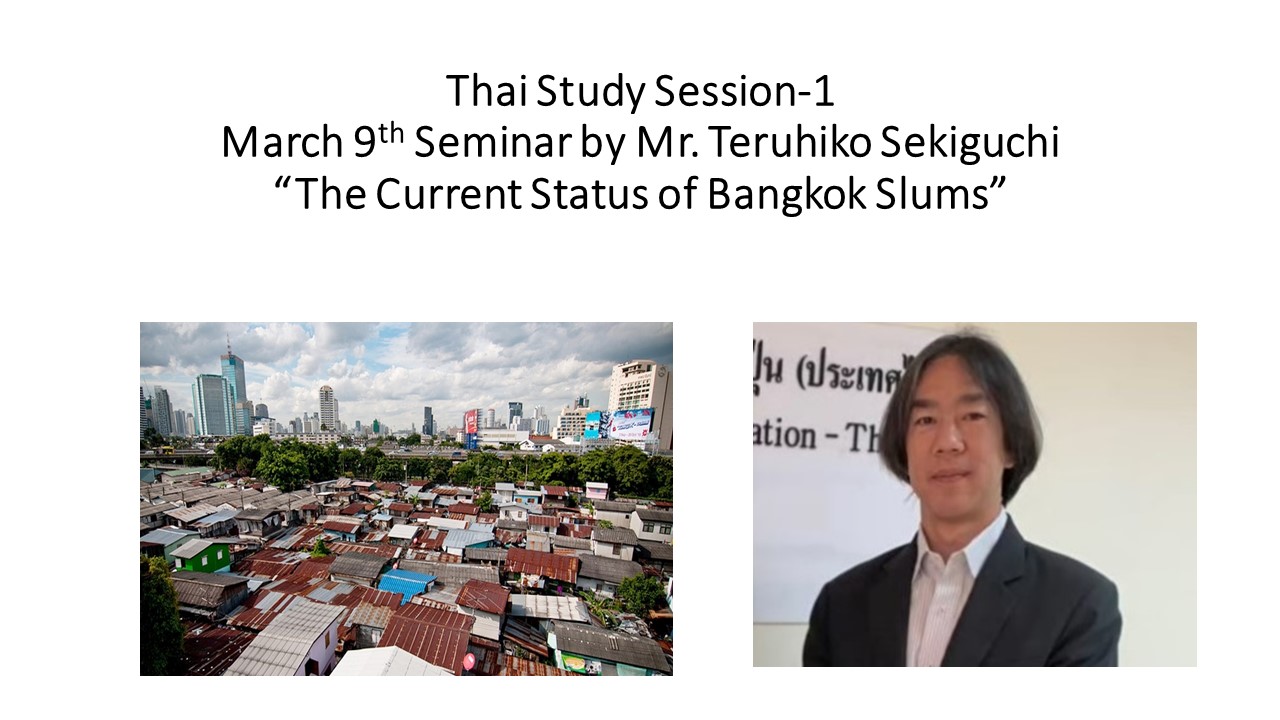 Students from Chuo University and Saitama University visit Northern Thailand in every November. Keio University students are also planning to visit Thailand from this year. OCA has decided to hold an online seminar to discuss various issues in Thailand. The first session was Mr. Sekiguchi’s seminar, where we decided to study “The current Status of Bangkok Slums.”  Here is a report of the seminar.

After graduating from Reitaku University, Mr. Sekiguchi worked as a volunteer for seven and a half years at Mae Kok Foundation, an orphanage for hill tribes in Thailand, and has been the director of the Bangkok Office of Japan International Labor Foundation since 2010. Having lived in Thailand for over 20 years, he kindly held a very interesting seminar.

On the day of the event, 14 members from Keio University, Chuo University, and OCA participated. The main contents of Mr. Sekiguchi’s seminar are as follows.

About 100,000 people, including Cambodians and Myanmar, live in Khlongtoey slum, the largest slum in Bangkok. Many Myanmar people live in the Thepraksa community district, which is famous as a mountain of garbage. Foreign workers live by doing dirty work that Thais do not work. Residents of slums can get support from the government for water, electricity and infrastructure development by registering as a community. If they have Thai nationality, they can receive a welfare card and benefits from the government. However, the number of people who have Thai nationality is limited, so the government’s support is not sufficiently widespread．

In Thailand, they can receive primary and secondary education free of charge at public schools, but in reality, they can’t bear costs of uniforms, bus fees, school lunches, etc., with their daily income of about 300 baht (1000 yen). Nor do the schools accept the children of foreign workers. Mr. Sekiguchi opens a learning class in the Thepraksa community district, which is famous for the mountain of garbage, and teaches Myanmar children a basic education in Myanmar, but it is difficult to get the support of the Thai government, because the government only accepts educational institutions registered with the Ministry of Education in principle. (In Japan, the number of foreign workers is increasing, but what kind of education do the children of foreign workers have?)

We received the following comments from the participants of the seminar.

I realized that the economic disparity, slums, and migrant worker problems in Thailand are built within the Thai social system and cannot be easily solved.

I was able to further deepen the knowledge I gained at the study session that I had previously worked with OCA members.  I am looking forward to future activities such as Mae Kok Foundation Visit and study sessions for hill tribes.

It was extraordinary and very interesting to be able to touch on things that would not happen if I lived in Japan, an island country with no land-based borders.

In addition, we learned that there were many complicated political backgrounds that had taken root for a long time in the background of the difference between rich and poor in Thailand, and I am much interested in how younger generations will solve this difficult problem under a risk of being severely punished for blasphemy and so on.

I would be very happy if you could tell us about the part that we couldn’t hear due to time constraints today.

Mr. Sekiguchi, thank you for explaining the very valuable information. We would appreciate it if you could talk about the TOPIX that you couldn’t do this time on another occasion.

For the second seminar, we would like to visit the orphanage “Mae Kok Foundation” for the hill tribes in Chiang Rai online to learn about “The Current Status of the Hill Tribes in Thailand”.  We look forward to your participation.